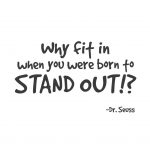 A word in another language means “Average.” Like, “Don’t make waves or be better than others,” or “Don’t stand out but be one of the crowd,”or “Don’t say your opinion in public and possibly offend others.” My firm belief is that this word and ideal are a tactic designed to hold people down.

A person I revere essentially said that it was a sad notion that when most people got a little power they dominated over others. The idea of being average basically says, “You’ll never be great so you might as well be mediocre. No one cares about your opinion, and besides you might offend someone, so keep it to yourself and don’t speak up. Who do you think you are? Do you think you’re better than everyone else?” Those lies, when believed, make us neither hot nor cold but lukewarm, and the lies take away our courage.

Why believe, think or do what makes us unhappy? Everyone can be brave and stand up to bullies. When we dare to stand up then others get the courage to stand up, too, and pretty soon we stand united.

The truth is that, “We are great. We have much goodness within us. And we each have the ability to accomplish wonderful things.” Our opinion matters and it’s brave to say what we think, after all we’re not telling anyone what to do but just speaking up. We aren’t better than anyone else but feel good about who we are and what we do.

I say to myself, “Dare to be exceptional. Dare to stand out and be different. Defend goodness. Reach out to others in a good way. Do what you can to impact people’s lives for the better. Have courage and be brave. Make your mark on the world.” Dare to say the same.