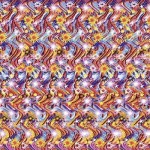 In my dream early this morning was a thought: My eyes have shifted to see the entire spectrum in my mind. (It’s like the time in the mall when looking at a picture of an optical illusion of a 2D repetitive pattern hiding a 3D image and my eyes shifted and I saw the Looney Tunes ending circles with Bugs Bunny saying “That’s all folks!”)

In my dream, when my eyes shifted, I could see people for who they really were and the world for what it truly was – that everything was spiritual. I could see people’s glory emanating from them like auras. Most auras were dim and I knew that saying positive, good things would cause their auras to glow brighter.

An idea occurred to me: It’s not a matter of not listening to the bad but of only listening to the good. Light dispels darkness. “Listen to God and obey Him.” Say what is wanted not what isn’t.

Negative things don’t matter because they’re an illusion to the truth. We must “taste the bitter cup without becoming bitter.” Negativity is in our lives to provide choices. It’s good to rise above what’s negative and choose only positive, good things. God is spiritual and I listen to God and obey Him.