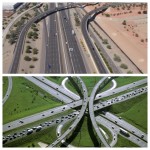 For two years (2013-2015) I didn’t drive … AT ALL. In October 2015 I was talking on the phone to my friend and I said, “This is ridiculous, you’re there and I’m here and there’s a car in my driveway, so I’m coming over.” I got in the car -after not driving for two years- and it was so scary to drive on roads with other cars but now I can say, “I did it!” (Her house was only fifteen minutes away and I didn’t die so that’s good!)

Every accomplishment makes me proud and two specifically stand out. (1) In October 2016 I drove 3-5 hours every day (Andrew drove otherwise) when we moved from Kansas to Arizona-we drove for 8 hours each day and it took us three days to get here. (2) In March 2018 I drove the 10 hour drive from my home in Arizona to Maile’s home in Utah just to prove to myself that I could. (Maile, my sister, was with me the entire time there and back; of course we stopped a few times along the way; she drove us back to Arizona.)

The freeways in Arizona are different from those in Kansas and they have truly added to my driving confidence. First, sometimes they really curve and it’s allowed me to feel okay knowing that I can drive the speed limit on curves. Second, the traffic in Arizona compared to Kansas is very fast!!; the speed limit on the freeway in Arizona is 65 (same as Kansas) but some people here drive up to 80! (When first living here I thought I will NOT drive faster than 65! but over the last year and a half my lead foot has gotten the best of me and sometimes I’ve been pushing 80-yikes!)

The other day Andrew said that my driving fast on the freeway gave him anxiety and a few days later it was just me in the car and I decided to drive in the slow lane and slow down and go the speed limit and see if it mattered to me…and it did!

Driving slower allowed me to look around and see things instead of dashing by them so fast that I didn’t have time to notice details or even see them at all. I could look around at the landscape and saw things that I hadn’t truly looked at before, and I thoroughly enjoyed my ride.

You know me, I’m philosophical and wonder things, and here’s my THOUGHT: Why was I driving so fast-its not like I needed to be somewhere? I drove fast to prove to myself that I could do it and yet maintain control. :END All I know is that up until now I’ve wanted to drive fast but now I want to drive slower. Sufficiently said, “The days of driving really fast on the loop are over!”

I’m grateful for the time I’ve been practicing driving and am very thankful for all that I’ve learned, remembered and applied. It’s all about comfort and enjoyment repeats in my mind and I know that it’s time to be comfortable and enjoy.