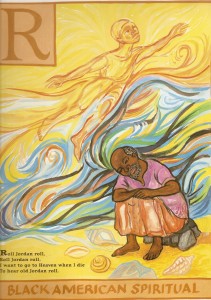 Inspirational People
Before the American Pioneers were inspirations because of their faith, the American Slaves were very inspirational. (See Negro Spirituals.) A lot of the spirituals mentioned going to Zion and being delivered.

Most immigrants in America left the country they loved for freedom or opportunity. They didn’t want to leave the country or people they loved but they did it to have something better.

It’s sad the way some people came to America. They couldn’t live in the home they loved. Full restitution can never be made for what some people lost. Many people wonder if wrong can ever be made right. I don’t know, but I do know that hope is found in the promise of the Lord’s words. No matter how one came to live in America the promise is to all:

“And inasmuch as ye shall keep my commandments, ye shall prosper”

Good People Are Told Lies
Many people today have deep spiritual beliefs. They keep the commandments but are targeted by evil people because of race. They are told (by evil people) to hate people different than them because those people hate them back. (They say: You’re held down, or it’s unfair, or you deserve better, or hate!) The bad things they say aren’t true! Evil people stir up good people’s hearts to anger even though good people actually have respect.

The Truth
All humans are brothers and sisters. Life isn’t fair but we all grow in adversity. Evil people cause anger in good people to serve their own intentions. We shouldn’t listen to evil people but remember the goal of where we want to go, who we want to be, and love everyone.

What’s Happening Now
Evil people are being divided from good people. The Lord told Nephi that the gulf dividing good from evil would be filled with the evil ones who made the trap.

My Hope
I hope all races will ignore evil people and be good. We live in a time where evil is very seen. We all have the choice between good and evil. Good always wins.